Peaches & Paprika held captive against our will! 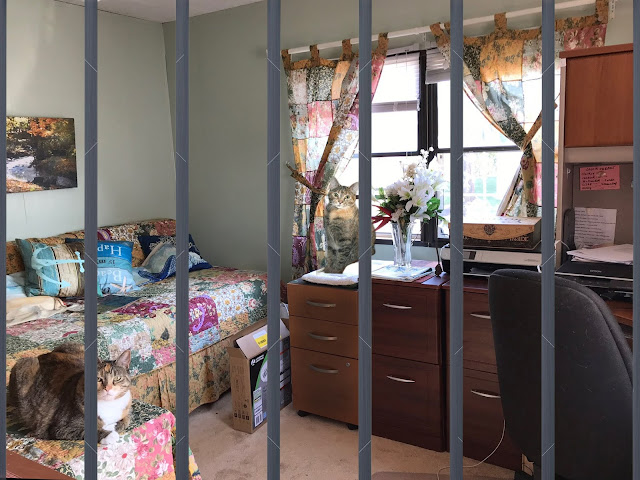 We have a secret!

A CRIME occurred last week.  We were captured by our human and held prisoners against our will. We were detained for six days with not even a "hearing" (meowing) allowed in a small 11 x 11 room.  - Peaches

In short, we became CAPTIVE CATS!

THE GORY DETAILS: HOW IT HAPPENED 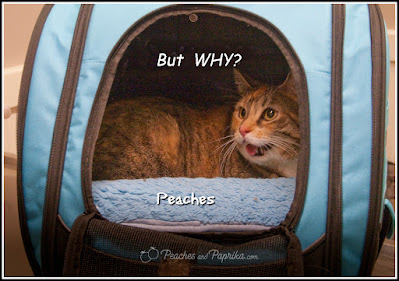 We were sunning ourselves in the usual morning places when without warning we were herded into the dreaded "carriers" and dragged without the courtesy of an explanation into a DEN OF CAPTIVITY.

Our human would only LATER explain the reason for her crime.  It turns out this "den" is actually our human's home office  We've been there before but we never HAD to be there!

Here are the details of our 6 day "in-cat-eration!"

DAY 1 IN OUR DEN OF CAPTIVITY 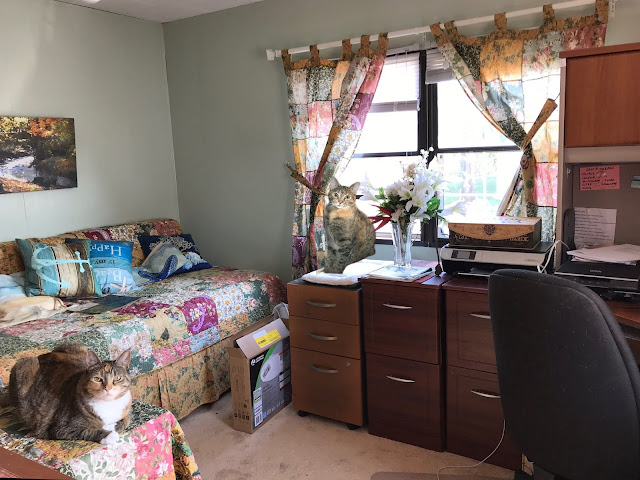 Our new "prison" was described by our human as being a paradise for cats.  Not exactly, but it could have been worse.  Inside the room were 1) TWO boxes for hiding, including a new "haunted house" our human had made for us on Halloween. 2) A human bed  3) two windows 4) Our human's desk and computers  4) file cabinets on which to sit to look out the window  5) a half bath containing OUR litter box 6) Curtains (to claw?) 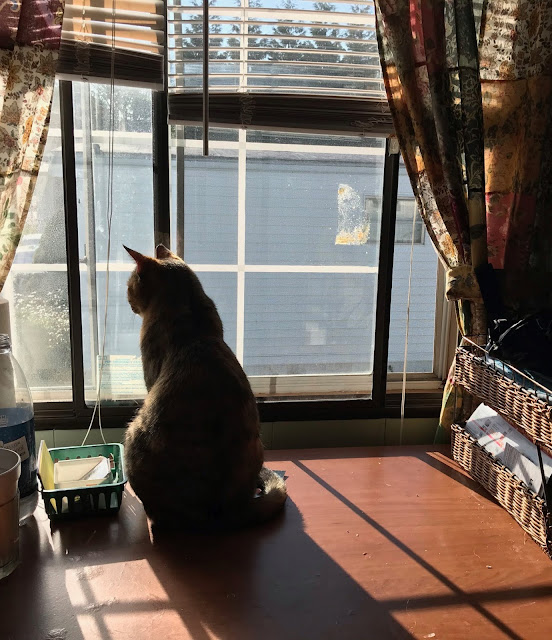 WHAT WE DID FIRST

Well the first thing we did OF COURSE was to look out the window.  (more on what we SAW in a minute)...AND HIDE! 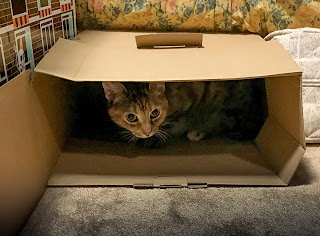 Paprika hid that is.  Our human had proactively" provided her with a long shallow box in which to hide and Scaredy Cat Paprika crawled right in.  (Our human must have been planning this for a long time!) 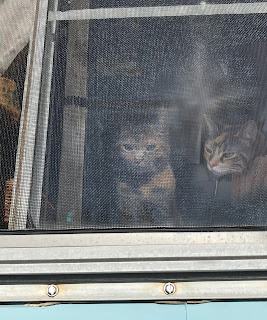 As we watched out the window we saw a strange black "monster."
Our human explained to us this was a "truck" which belonging to something or somebody called "contractor."  We had never heard of a contractor and didn't want one!  But our human said we had to have one here for six days because she had a flood in three rooms right after she moved in and he was "fixing it." 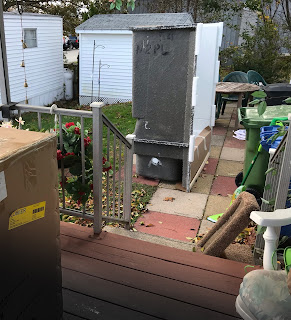 There were very strange items in the front yard waiting for entry into OUR home, such as we had never SEEN before.  One of them was called "tub."  It was huge.

We indulged in a little fantasy called "Claw the Contractor" which our human told us was "inappropriate." We don't know how she knew what we were thinking. 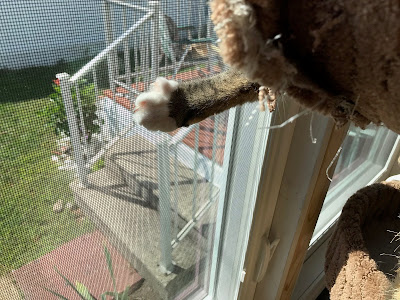 Hello.  Paprika here.  There was horrendous thumping, banging and other scary noises the first day. Our human said it was the evil contractor making the noise. Peaches shoulda given him "the claw" but it was too late. When I wasn't hiding, I was hunched on the bed, transfixed, trembling at every noise  My oblivious sister, Peaches on the other hand, slept through it ALL! 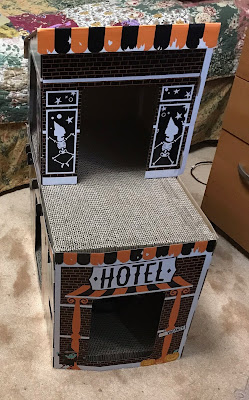 Peaches here to continue our story. Our human directed our attention to the new 2-story  "Haunted House" she'd built us (Wasn't Halloween OVER?). 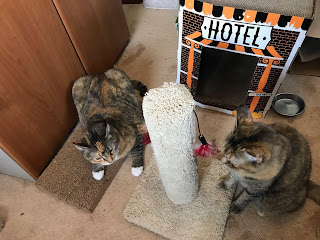 She also started bringing out boxes of all the toys we'd ever owned.  A different box every few hours.  You can't fool us, human.  We remember those toys, they're NOT new. 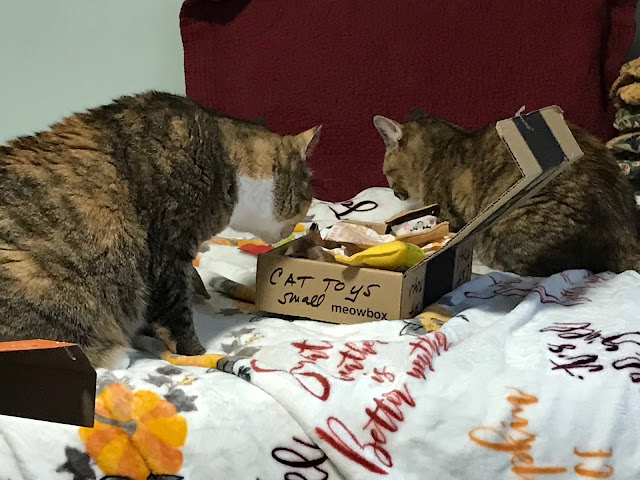 Still, we DID play with them. For a while. A captive cat's got to pass the time somehow.  We even played together.  We don't do that as much anymore but Day 2 was an exception.

But on this occasion we slept together on the twin bed (when our human wasn't hogging it at night). You never knew what would happen next and we needed to present a united front.  Paprika suggested a breakfast boycott.  I voted against it. 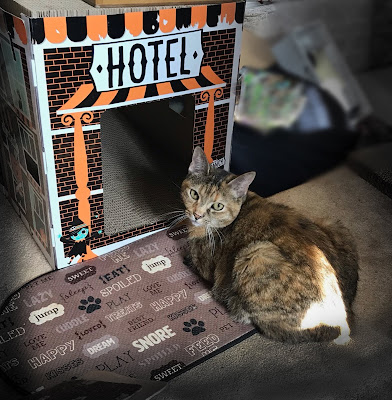 Paprika was kind of a pain in the neck as during mealtimes, she insisted on BUTLER service inside the haunted house. 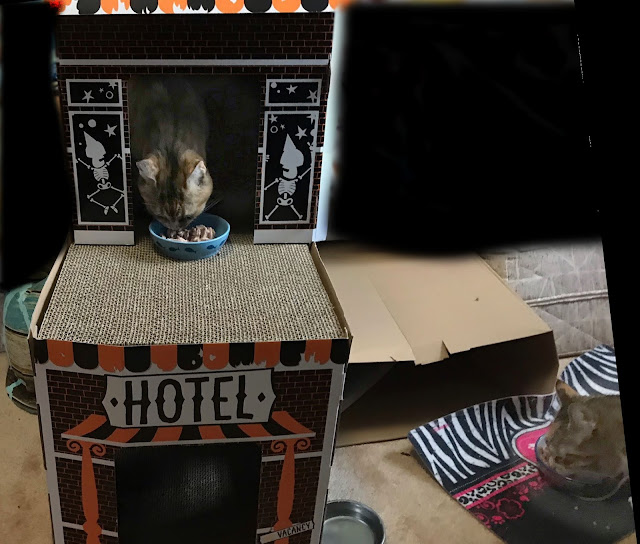 She would alternate between the upper and lower deck.  Must be nice!  I just chowed down as I always did.  I DO credit our human with giving us TUNA the first two days. (But then she switched to salmon).

DAY 3: "THE LOOK" AND REJECTING THE TOYS

Good morning, Paprika here. We decided to assert our independence by rejecting our human's attempt at bribery (the toys) and also practiced giving her "THE LOOK."  You know what we mean by that.

The "saving grace" or this imprisonment is that our human stayed in the den with us the whole time!  I, Paprika was grateful.  Peaches however was skeptical. "that's just cuz her computer' is in here, TOO," she meowed at me.

At night, all three os us would huddle together in her small twin bed in the den.  We worked it out though.  Human in the middle, one cat at head and one cat at foot of bed.  Worked out good plus we all stayed warm.  We cats have been known to be called "miniature heaters." 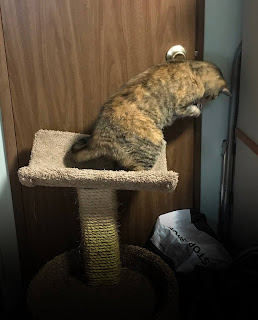 On Day four, I, Paprika, thought I had found an escape route...a way OUT!  I ascended to the top of a tall cabinet next to a DOOR! With a strategic stretch which only a cat like I can do and using my nimble paw, I managed to get the door open! 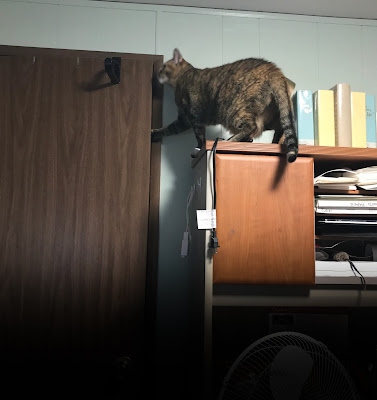 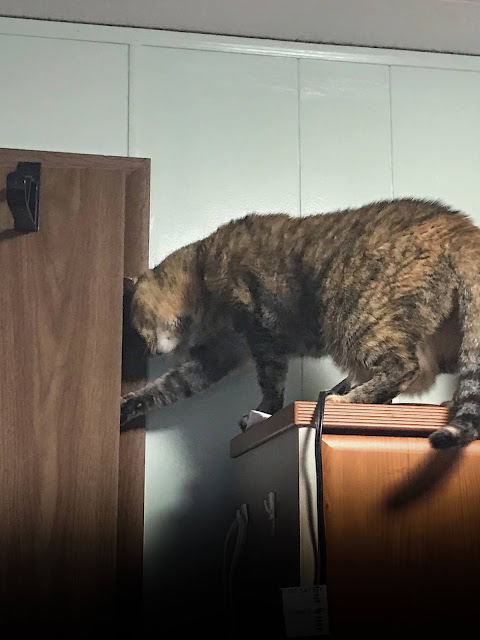 Only to find...it was a closet door!  Curses!  Foiled after all that work and planning!

On day four we continued gave our human stronger doses of "the look."  She deserved it.

We crept closer to each other.  This is counter to our "keeping a distance" like we usually do.  We cast all our differences aside.  We HAD to present a united front now.  We gave the human "THE LOOK" simultaneously.  This is now cats gain power. A double "look" is so much more potent than just one cat doing it.

DAY 6: "TERRORIZED BY A HUGE SNAKE" 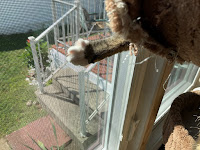 The evil contractor FINALLY left despite the fact we never got to use "the claw" on him.
However he was replaced by an even worse creature called "STEEMER" (First name Stanley).  We were told that now that "the work" was over, everything had to be "steam-cleaned."  What a joke.
We've never had to hire outside help for cleaning!  Our human is being ripped off!   If she only would have asked US to clean!  The worst part of the "STEEMER" day is that "Stanley" brought a giant noisy SNAKE with him, that we could see from the window wriggling into the house and creating noise & mischief! 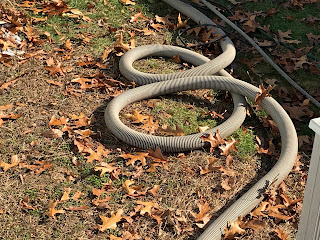 We were terrified about whether he would be "steaming" OUR little room." But fortunately we were spared. Peaches who kept guard at the window finally reported  he was leaving.  Phew!

OUR RELEASE FROM CAPTIVITY 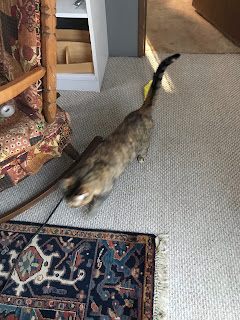 The door to our prison  creaked open.  We were so used to be imprisoned by then, we didn't notice at first. Then we did but weren't sure what to do.  So we CREPT out, slinking close to the ground as we crossed the living room. 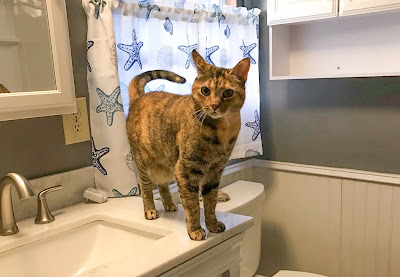 Then we discovered IT--the "new" bathroom. Peaches, the coward went in the room and shot out of it "like a bat outta H..." as if she'd been shot out of a cannon.  Coward.  It was left to me, Paprika, the explorer, to investigate and inspect the new space to 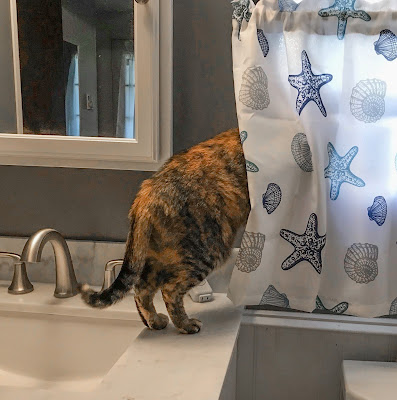 make sure it was "satisfactory."  Well it did smell odd. But I explored 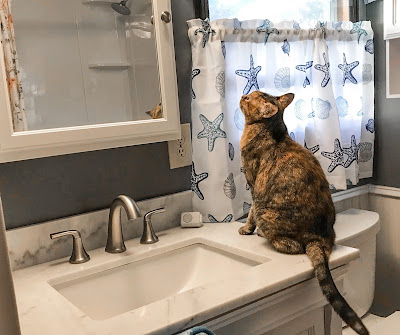 all corners and tried out every surface.  There was a new white sink plus a strange white huge monster (tub) and more. The medicine cabinet tops are always inviting don't you think?  I was about to try that place out too, when the human came in.  I made so many strange sounds, jumps and meows that our human photographed me doing a welcome dance in the new 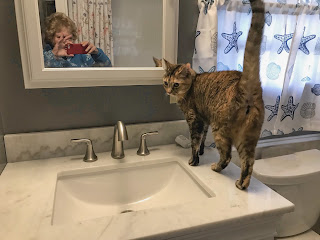 room.  Finally she dragged me out of it before (she said) I got "wet" by being given a bath.  That was an idle threat, though.  She wouldn't do that, would she? -- Paprika

OUR TAKE ON OUR 6 DAYS IN CAPTIVITY:

In summary, it wasn't so bad, being captive cats, as we thought. We bonded with our human in the enclosed space and learned to be sister-friends again, which was highly advisory given the uncertain conditions! We still feel, however, somewhat miffed & even mildly outraged at being "shuffled about" in a high-handed manner without getting our "purr-mission."  so for several days afterwards, we continued to give our human "the Look."  However, by mutual agreement we inflicted no other punishment upon her.  However if we ever got ahold of the "evil contractor" or "Mr. Steemer and his snake," it could be a different story.

Mom Carol's comment:    Worrying about my kitties' stress level was the worst part. But I actually enjoyed  the cozier than usual "bonding" with my fur-balls 24/7.  Once they gave up trying to escape & became accustomed to the den's boundaries, they were even more affectionate thanusual.  I loved the way we found a way to hang out together on that tiny bed.  But I'm SO glad the renovation is over.  Over & Out! 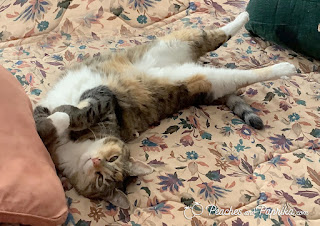