10th Anniversary of our Gotcha Day! 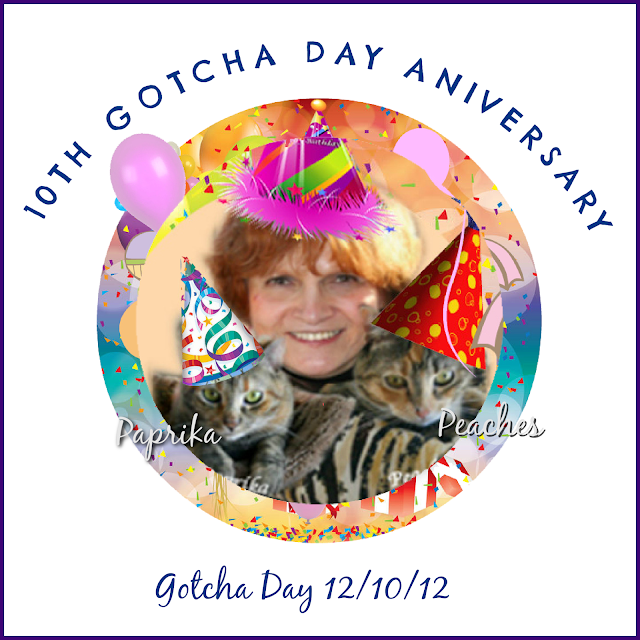 Peaches the cat here with a tale to tell and never-before pictures to show. We can hardly believe it, but it's true.  Ten years ago on December 10, 2012, our human brought us home.  Before meeting our lucky human rescuer, Mom Carol, though we got stuck in 3 shelter and had a narrow escape
from death row in NYACC.  Here's a little of our story! 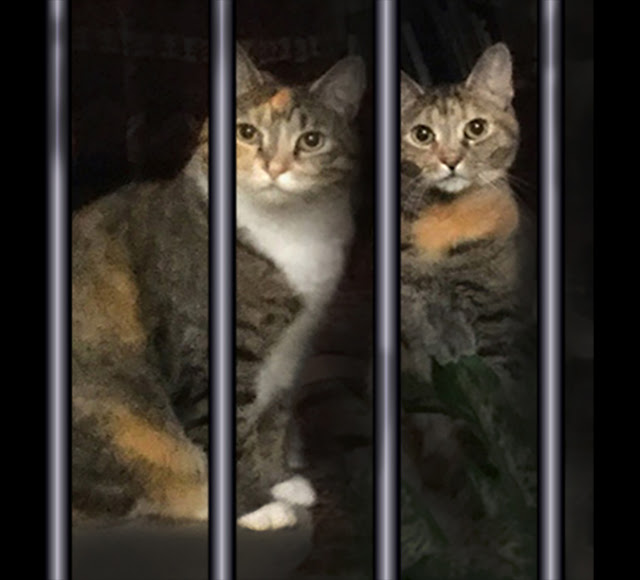 We started out in captivity at NYACC....our previous owners were sweet and kind and we became sweet cats...but alas, they moved out of the country and took us to....NYACC...where we got shelter colds..

We don't mean to depress you on a lovely holiday weekend but THIS was our home then... 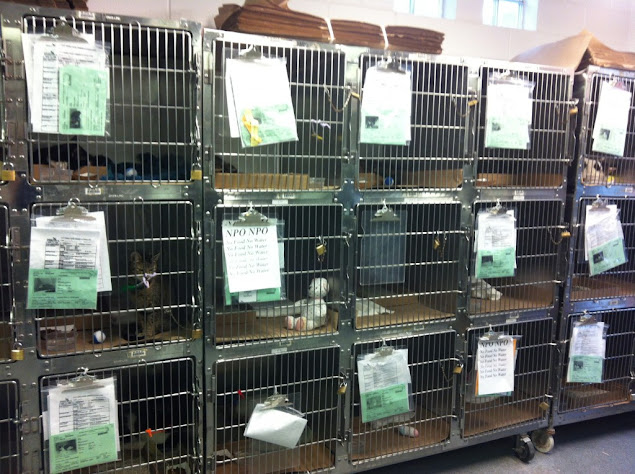 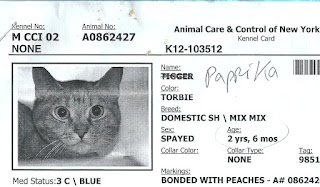 Yup, we were there.  We never showed these pictures before...we were embarrassed, but this being our 10th anniversary, we wanted to share our story with you.
So AFTER we had those shelter colds, they put us on the "Euthanasia" list called "Death Row" on Facebook.
The good part of this was that they posted these pictures of us online and many readers AND shelter volunteers fell in love with us and posted nice things about us.  Here are some of the things they wrote! 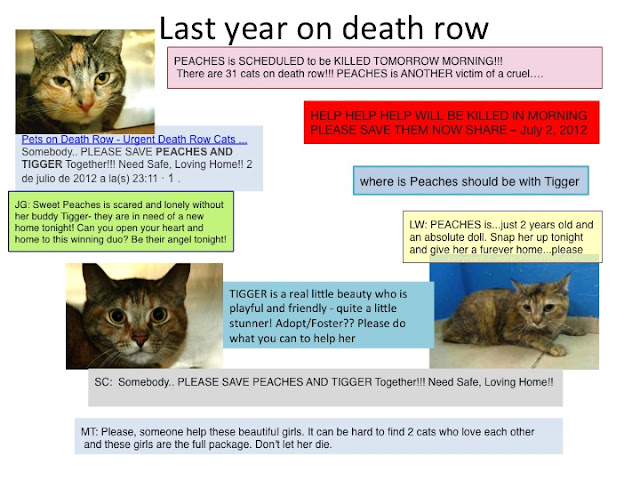 As a result of these poignant posts, many readers pledged funds to save them and they ended up getting SAVED by an angel named Joann from Feline Rescue of Long Island. This wonderful new foster lady named Joann nursed us back to health and brought us to Connecticut to Marys Kitty Korner, a no-kill shelter.
Mom Carol and US (above)
Our first portraits chez Carol with huge eyes below: 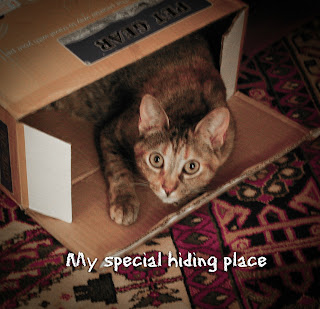 Our first night here was rather scary...(Paprika was afraid to come out of her box)...though we WERE given our OWN room...complete with scratching post...soft rugs, food, treats and toys. It was called "bathroom." We weren't sure at first...but eventually we were brave enough to venture 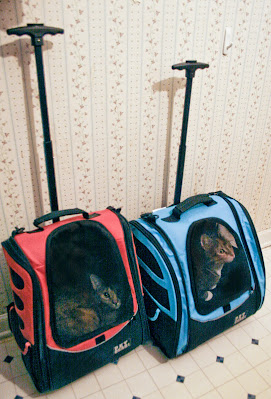 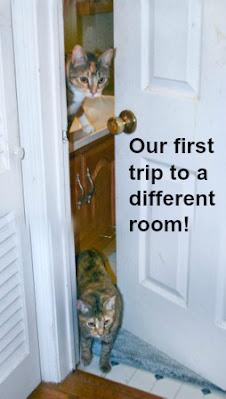 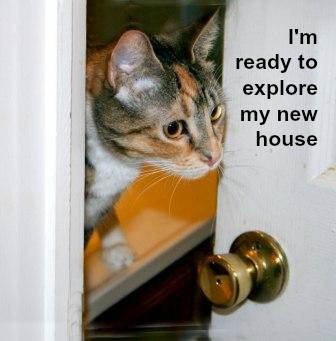 A question remained that first day: 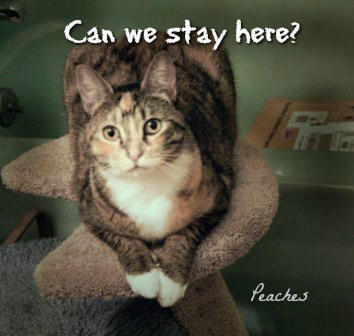 Of course, being the lovable furries we are, Carol told us she wasn't letting us go anywhere! She loves us both and we're awaiting our 10th Christmas here. 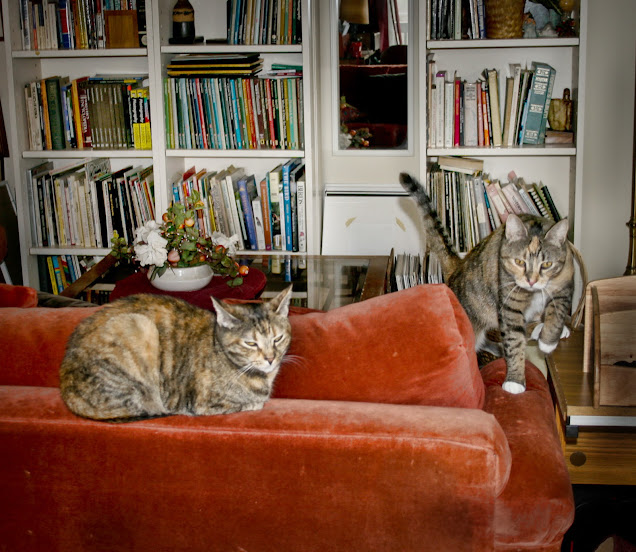 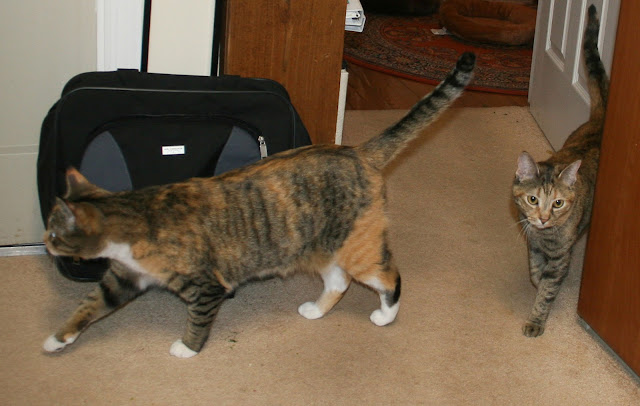 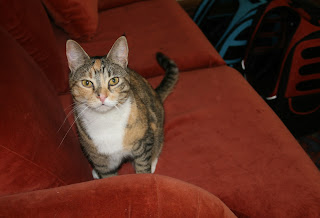 One last confession:  I did go out of my way to love bomb my human with award-winning moves..I was taking no chances!  Here is one of my early efforts...I gazed into her eyes and tilted my head in that certain way...how could she resist?

Then there's THIS posture.... 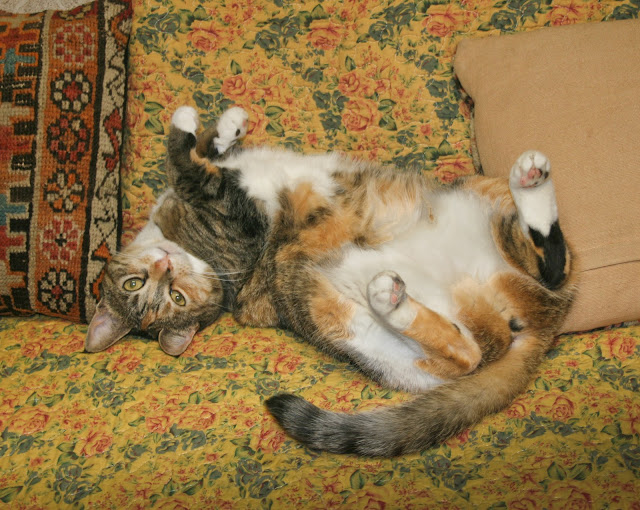 We have taken over the house, believe me!  We set the rules, although we still haven't come to an agreement on the quantity of tuna  being served here...
We're joining Athena Cat Goddess and The Cat on My Head's blog hops  today to celebrate...and to give thanks for those joy-filled 10 years...
Love, Peaches (on behalf of Peaches & Paprika)