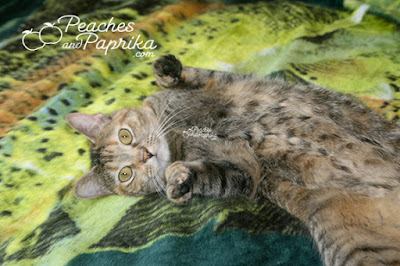 Am I. Paprika, a floozy?  I think not, but everybody is talking about me, so now I'm not sure.  At my owner's request, I am TURNING MY BATON over to her for a description of last weeks' dinner and what I am accused of! -- Paprika the Cat

Okay, surprises happen but Paprika is usually a shy cat. Especially with visitors.  Apparently her shy side did NOT apply to her outrageous behavior with my dinner guests last week.

My Friend Donna and her boyfriend Tim were my dinner guests last week for my birthday.  So the three of us are enjoying a shrimp stir fry. Tim's on my left.  He's a DOG person not particularly into kitties.  Doesn't "get" them. So when he felt F-U-R rubbing across his shin he jumped to the conclusion his dinner shrimp was being coveted.  "No I WILL not feed you!" I heard him suddenly say sternly.  With amusement I realized he was talking to Paprika.


"You cannot Have Any...and that's THAT"

Paprika has little food interest in food, especially human food. She won't even take a bite out of my tuna can.  I seriously doubted she had any interest in Tim's stir fry.  Yet a moment later I heard more conversations.  "I SAID you cannot have any and that's THAT."  Apparently Paprika had not given up. "No, you Cannot..NO!"  Bemused, we all listened to Tim's conversation.

"No I Will NOT Bend Down and DO That"

Whaaaat?  "No I will NOT bend down and do that" we heard him say.  I could not resist.  Wondering what it WAS he "would not do" I jumped up from my meal & went around to Tim's side of the table to see what was going ON down there.

To my astonishment, my FORMERLY shy cat lay SPRAWLED on her back ON Tim's foot, poking up her little orange tummy in his direction.  Her legs were askew, her front paws reached up & she was eyeing him beseechingly.  At the dinner table!  On her back!  It was obviously she had fallen in love & was hoping for some action!!!!

Like a total idiot, I interrupted my dinner and...

Tim, my clueless dinner guest clung to the theory she wanted a shrimp.  I knew better.  so that Tim could finish his dinner in peace, I feeling like a total idiot, crawled toward her to alleviate the situation so that she would NOT be deprived of her obvious tummy rub request.  But I was feeling stupider by the moment as I massaged her orange tummy.  My girlfriend Donna was in hysterics.  But Paprika purred happily and looked at me with a cunning not previously seen in this cat.

"Oh I didn't know she wanted THAT"

"I didn't know she wanted THAT" said innocent Tim.  Though I was not as shocked as the others, I WAS surprised at my shy Paprika transforming into a shameless hussy at the unaccustomed sight of a male dinner guest.  And he didn't even like cats!

"I didn't know you were such a little floozy" I said to her later.  She looked at me with an inscrutable expression...

These cats with whom we share our home...you  never know about them!